On November 22, many countries celebrate Musician’s Day. Why? 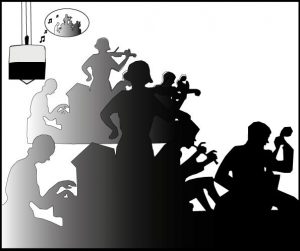 The story goes back to 200 or 230 A.D., when a young woman in Rome named Cecilia was accused converting to Christianity during a time a time when Christians where persecuted . In some stories, it said that on the day of her marriage, while the musicians were playing and the guests were having fun, she isolated herself in a corner to pray to God.

Her relationship with music is not entirely clear, but various works of art portray her surrounded by musical instruments, mainly the piano. Many years later, in 1594, Pope Gregory XIII named her patron saint of musicians: Santa Cecilia.

Tradition has it that November 22 is the day on which Santa Cecilia died or was born into eternity, depending on how you want to see it. Over time, this date became significant thanks to the various events that were held on this day. In 1570 the French town of Evreux (Normandy), held a tournament of composers of the time. The tradition was consolidated by other events, which took always place on November 22 in various nations spreading to several European countries, followed by Latin America. For example, in Germany, it is known that: “Der Tag der Hausmusik” since 1932.

In the end, no matter the date, every occasion is excellent to create, sing, and above all, listen to music. Alone or accompanied, the best sound quality is achieved with the right loudspeakers.